From Guiding Tourists to Guiding the Future Generation

With her work as a tour guide severely affected by the pandemic, 57-year-old Ong Lay Chern finds her second calling as an early childhood assistant teacher.

She carefully straightened her well-ironed blouse before taking a seat at her desk.

She then gently adjusted her glasses and eloquently greeted me in Mandarin over the computer while I struggled to respond in a grammatically correct sentence in my mother tongue.

Ong Lay Chern, 57, one of the many tour guides whose livelihood was severely impacted when the Covid-19 pandemic breached our borders.

With the number of inbound tourists at an all-time low, she sought temporary employment as a safe management ambassador [SMA] for pre-schools with the help of NTUC’s e2i (Employment and Employability Institute).

And through that role, she found another yet opportunity; one which gave her more enjoyment and self-fulfilment.

Being an assistant teacher.

Where It All Began

She took me back to when the pandemic first started and how it affected the local tourism sector.

She recalled: “When Covid-19 first happened in January 2020, we [tour guides] initially thought the virus only affected Wuhan. It later turned out to affect the whole of China. During that period, it was supposed to be the peak travel season for inbound Chinese tourists, but in the end, all trips to Singapore were cancelled. It affected the local tourism industry very badly.

“We initially thought it would be like SARS, and that it would be over in a couple of months. But by June-July 2020, it had been months since I was out of work, with no sign of the pandemic ending. So I spent my time scrolling through job postings and chanced upon e2i’s Facebook advert for an SMA role at a pre-school under NTUC First Campus. I love spending time with kids and the environment was also safer for me to work in, so I applied.”

From SMA to Assistant Teacher

I asked Lay Chern for the difference between being an SMA at a mall and that of a pre-school.

“My role was to ensure that safe distancing rules and temperature taking for staff and children were adhered to. I made sure that the children practised good personal hygiene, such as frequent hand washing, and that they kept a safe distance from each other, especially during mealtimes,” she explained.

And because she saw the children every other day, Lay Chern felt that she could contribute more to the overall wellbeing of the children. This led her to apply for a role as an assistant teacher instead.

“I used to take care of many tourists, so I brought the same customer service skills and friendly demeanour which I used to handle tourists to take care of children. Plus, children are also easier to manage!” she said with a laugh.

Lay Chern also considered herself lucky to land the role.

“My other colleagues mostly found temporary jobs such as safe distancing officers in malls. I would say that I am one of the more fortunate ones who managed to find a contract role as an assistant teacher,” she explained.

The principal of the pre-school, Karen Sim, said that Lay Chern is respectful and diligent in her work.

She shared: “Lay Chern has always displayed a positive disposition, shown a willingness to learn new skills and has never been shy to ask how she can do better. She puts in the effort to remember every child’s name to ensure that she can receive them happily during arrival. She also builds relationships with colleagues in the centre.

“Her joyful personality is very warmly received by everyone in the centre.” 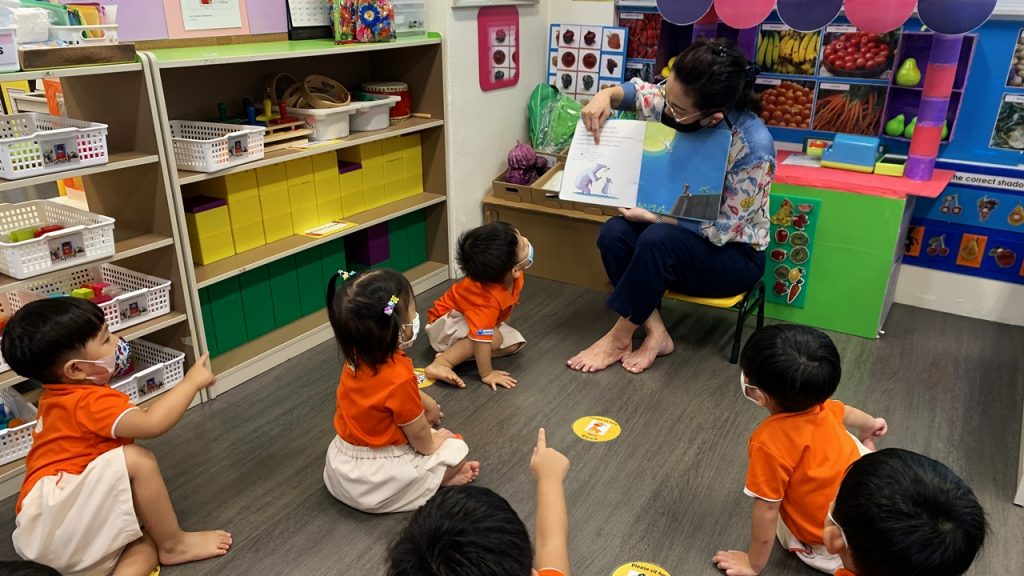 When asked what she would take away from this entire experience, Lay Chern was quick to respond with a smile.

She said: “The whole experience has been a memorable one. I love watching the children grow. When many of them first came to the centre, they could not really speak. It has been really rewarding to see them grow and over the months, many of them can now speak and call me by my name.

“As an assistant teacher, I get to be softer with the children [compared to the teachers] and to chit-chat with them more. Many of the children will often come and find me just to talk. We have become close and I love this part of the job.”

But she hopes to eventually return to the tourism sector.

“I hope that the tourism industry will recover soon so that I can return to my job as a tour guide since I have spent more than 25 years as a tour guide. I love the experiences that come with it and being a guide suits my personality. I get to stay in all sorts of hotels, eat all kinds of food, and have all kinds of experiences!”

Lay Chern also encouraged other tour guides to find a job during this down period and to use this time to learn and upskill.

“As a tour guide, I wasn’t exposed much to technology but in this assistant teacher role, I learned how to use a computer and picked up more digital skills,” she said.

Jobseekers who wish to join the sector as Early Childhood educators can pursue either a certificate or diploma in early childhood offered by the National Institute of Early Childhood Development (NIEC) or ECDA-accredited programmes conducted by Private Training Agencies.

Interested mid-career individuals may also join the Early Childhood sector through the Professional Conversion Programme for Preschool Teachers and the Place-and-Train Programme for Educarers to equip them with the necessary skills and ECDA-accredited qualifications.

Jobseekers can also visit e2i’s Calendar of Events for the institute’s next career fair and hiring opportunities.