This post is a contribution by NTUC Assistant Secretary-General, Zainal Sapari. Any extracts should be attributed back to the author. 30 October 2019.

Recently, in an article by CNA on 11 October 2019 titled “TADM recovers S$29m in owed wages; resolves 85% of salary claims within 2 months”, it shared a story of an employee, Ms Quek, being served a lawyer’s letter by her employer demanding two month’s salary as compensation for serving the company for less than a year – as stated in the employment contract that she had signed.

Fortunately, she sought assistance from the Tripartite Alliance for Dispute Management (TADM) and after several rounds of mediation, the issue was resolved.

Interestingly, the employer initially stood their ground, probably thinking that they had the upper hand because of the signed employment contract.

Ms Quek “was super scared” and “cried” when her employer intimidated her with the lawyer’s letter. Kudos to TADM and shame on the employer for such deplorable and unethical behaviour.

Unfortunately, there are other Ms Queks out there facing similar predicaments because of one-sided, and unethical clauses.

Due to the challenging business environment, there are employers who may resort to underhand practices or tactics to address the problems they are facing, but to the possible detriment of the workers.

Some employers have included in employment contracts certain clauses that may not be fair to the workers, perhaps to address staff attrition, recoup losses they incurred due to liquidated damages, or protect their business interest. Regardless, including unfair clauses is unethical as they abuse the vulnerable position the workers might be in. 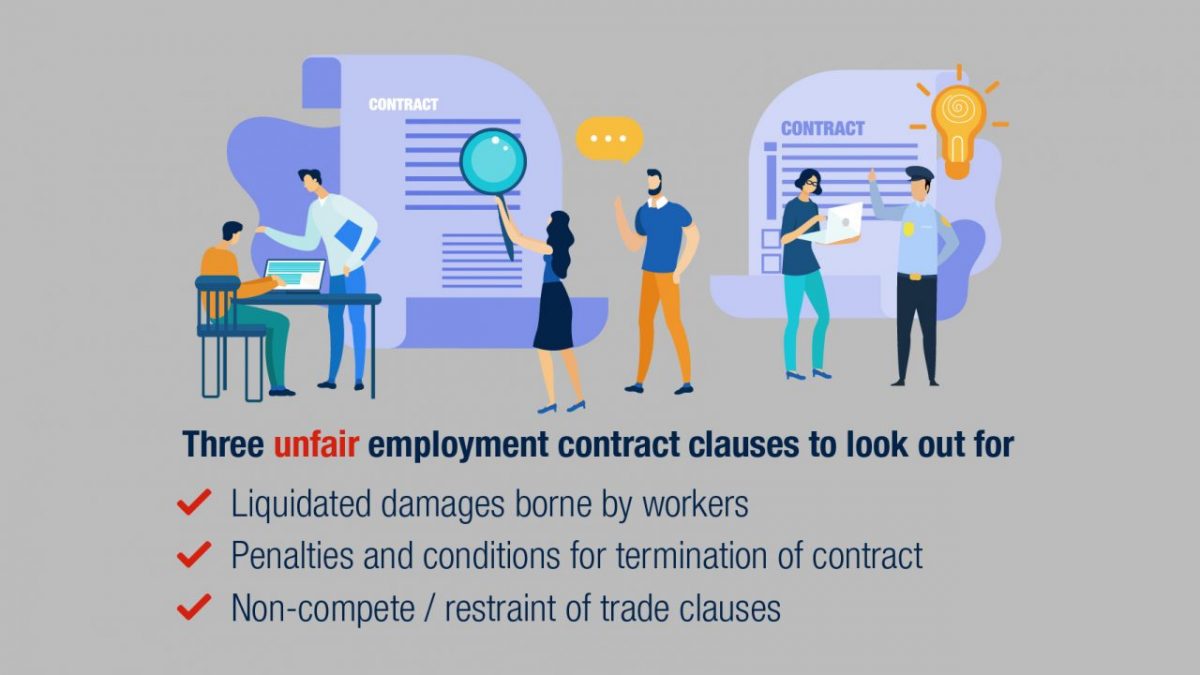 In the outsourced service industry, such as cleaning and security, it is quite a standard practice for service buyers to reflect the liquidated damages payable for non-performance issues in the contract.

Given the narrow profit margins they are getting, these service providers may then resort to passing the cost of liquidated damages to the workers.

A worker signed an employment contract to be a security officer, which came with a basic monthly salary of $1,100, but the contract came with a list of liquidated damages payable by the worker should there be any breaches. He had signed the contract since he needed the job.

The truth is however, some employers get away with it because some vulnerable, low-wage workers are unaware of their rights or are afraid to report their employers for fear of losing their rice bowls. They may also think that they have agreed to these deductions, and thus allow their employers to do so.

Unfair clauses in employment contracts can come in various forms.

In the case of a trainer earning a basic monthly salary of $2,000, a clause in his employment contract stated that if the contract was terminated within one year, regardless of whether the termination was initiated by the employee or employer, the employee was liable to pay the company a penalty of $50 per calendar day from the date of the termination notice till the one-year term.

This could amount to a few thousand dollars if the trainer wanted to cease working for the company and take up a better job offer. What is even more incredulous is the penalty is payable even if the termination was initiated by the employer!

Are such clauses in the employment contract even legal? Under Contract Law, is it enforceable in court? Do workers even have the financial means to challenge such unfair employment clauses if the case is brought before the court?  What is the position of our court on such unfair clauses if the employer refused to resolve it during mediation at TADM and insist on going to court?

Despite the gruelling work, he had to endure it because he did not have the means to compensate the company, and feared legal action would be taken against him should he resign.

Based on common law cases, it would seem that liquidated damages that are not a genuine pre-estimate of the losses incurred would be unenforceable – but this is not clear to employers and employees.

Perhaps, the tripartite partners should come to an understanding or draw out some guidelines on the applicability and enforceability of such unfair clauses in employment contracts. This would discourage companies from including such clauses to intimidate the workers into compliance.

Real Case: PMETs Are Not Spared

You would be surprised that vulnerable, low-wage workers are not the only victims of unfair employment contracts.

One would have thought that PMETs (professionals, managers, executives and technicians), being more educated, would be more careful when it comes to signing employment contracts. But some fail to do so.

A fresh graduate PMET was excited to be offered a new job with a good salary, commensurate with her academic and professional qualifications.

The employment contract she was asked to sign contained a clause where she would be required to pay a liquidated damage of $100,000 to the company, should she resign and work for another company in the same industry. The employer, her future boss, seemed reasonable and assured her that it was a “standard” clause.

If this case went to court, it is likely that the court would hold the clause invalid, as the amount of $100,000 seems excessive and may be deemed to be a penalty clause. Again, it is a painful process to go through the legal route and is mentally draining for the worker.

There are also employers who have used the “Restraint of Trade” clause even on rank and file workers. The clause aims at protecting the company’s interest by preventing employees holding positions in senior management from competing with the company after they leave.

However, in one security agency, it was used to prevent their security officers from resigning and joining another agency. The contract stated that the agency will take legal action if the officer was found to have worked for another security agency within four months of leaving the company. Clearly, such clauses used against workers should not be condoned, but unfortunately, at the pre-trial conference before the Courts, the workers were not represented by legal counsels and did not contest the employer’s claim. As a result, a consent order was issued against the workers.

If the worker had challenged the claim, most likely the Courts would stop such Restraint of Trade clauses from being imposed on non-critical or rank-and-file employees. The law is on the workers’ side in this aspect but, the only thing is that workers must take it to the court if challenged by their employer, which, unfortunately, many low-wage or vulnerable workers are not prone to doing.

It is sad to see employment contracts, which should benefit and protect both employers and employees by preventing potential miscommunications and missteps, being used by unscrupulous employers to take advantage of unsuspecting employees. Workers who were not properly advised of their legal rights would likely bend to the unreasonable demands of an employer with substantially more resources. As such, there is an urgent need for the tripartite partners to provide greater clarity and guidance on fair and proper contracting practices.

More Education Needed for Both Employer and Employee

Without a doubt, more can be done to educate workers on employment contracts. The tripartite partners have published a set of “Tripartite Guidelines on the Issuance of Key Employment Terms (KETs) in Writing”, and the Tripartite Alliance for Fair and Progressive Employment Practices (TAFEP) supported the efforts by providing an advisory through their website on how to get your contract right, cases of unfair employment contracts still exist. For NTUC Union Members, help is available via the TADM@NTUC, the NTUC U Care Centre or their respective unions.

Perhaps, MOM may also want to consider a “cooling off period’ (perhaps up to five working days) that will allow workers to rescind the employment contract they have signed, without penalty.

Companies that use underhand tactics of bringing the case to the courts may have the legal right to enforce it, but morally, they are wrong to take advantage of workers’ vulnerability. Perhaps, to discourage such underhand tactics, MOM or TADM may also want to consider starting a watch list if companies are found or reported to have unfair clauses in their employment contracts. Administrative penalties should be imposed on companies on this watch list.

Employment disputes can be minimised when both employees and employers take ownership of their respective roles.

Regardless of how excited you are in securing that much-needed job, you should always read your employment contracts and keep a lookout for key employment terms before signing anything. If you run into problems, remember you can always look for NTUC@TADM or its affiliated unions for help if you are a union member.

Employers can also do your part by ensuring your employment contracts take reference from industry norms or best practices.

When employers and employees play their part and apply the principle of reciprocity, it makes the workplace a better one for all.

Going Beyond the Pay in Uplifting Lower-Wage Workers