Exclusive: No One Should Be Left Behind 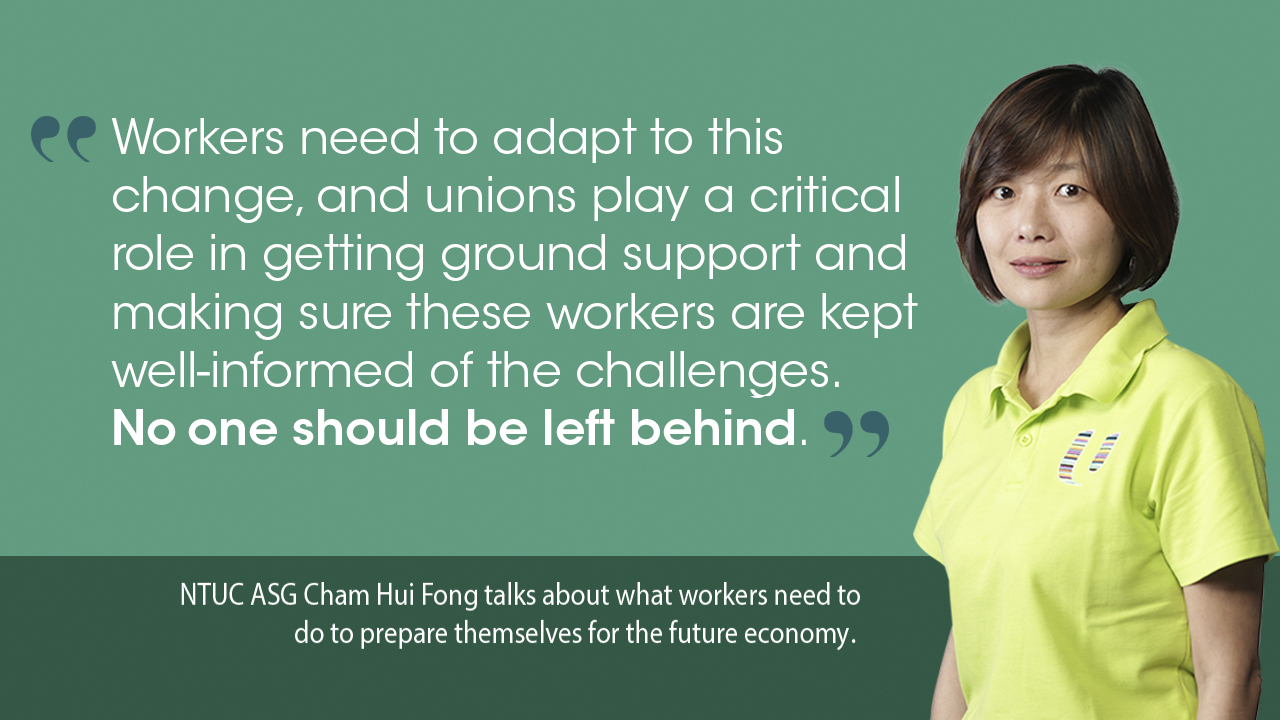 By now, you would have read the report released by the Committee on the Future Economy (CFE), which outlines seven strategies to take Singapore into the next decade. NTUC This Week sits down with NTUC Assistant Secretary-General Cham Hui Fong in an exclusive interview and hears from her on issues that were raised at the CFE and the reasons why.

NTUC This Week: You were part of the 30-member CFE committee when it convened last year. What were some of the worker-related issues you raised on behalf of the Labour Movement?

ASG Cham: Last year was quite a challenging year for Singapore. On the topic of jobs and skills, we wanted to see how we could turn challenges into opportunities. We also saw a need to continue assuring employers and workers that despite the challenges, there will still be growth and opportunities.

One concern we had was about not leaving behind vulnerable groups such as older workers as we move forward.

When we transition into new markets and technology, older workers are at risk of being left out, so we placed a lot of emphasis that we must help them transition too.

We also raised concerns about workers who are less educated. This group should not always be in the lower strata of the economic ladder. They should be given opportunities to move out of the lower-income group. Concerns faced by working women and back-to-work women were also raised. When there are new opportunities, everyone should be allowed to seize them.

What were some of the feedback given by unions when they were consulted?

When we spoke about future jobs, words such as disruptive technology, cyber security and data scientist were used. The unions and union leaders couldn’t really resonate with these words and it seemed we were only targeting young PMEs (professionals, managers and executives). Many of those above 30 felt that not enough emphasis was being placed on them.

Even though the whole intent is to grow the pipeline of new entrants into the economy, we need to also think of how we can nurture the existing group of workers. So we brought it up to the committee and highlighted that those currently contributing to the economy shouldn’t be forgotten – that we should continue to provide them with enough opportunities and we need to retool the entire workforce.

Can you comment on the role of innovation and productivity within a changing workforce demographic?

Technology and the changing demographics are issues that come together. Each worker age group has a different set of challenges. It doesn’t help that our population isn’t growing fast enough. It is a challenge that the number of workers coming into the workforce is getting leaner and that we are facing an ageing workforce. Changing demographics is forcing us to look at new ways of doing things.

It goes back to the importance of driving changes through innovation, value creation and productivity. These are important because innovation and value creation would interest the younger population, while productivity can help older workers sustain their jobs and be gainfully employed for a longer time. Of course these would in turn help enterprises build their capabilities and scale up for the future.

What do the CFE recommendations and strategies mean for our workers and unions?

The recommendations and strategies give assurance to our workers that despite the global challenges that we are facing and the uncertainties that are looming around us, we believe that as a resourceful country and economy, we can work together to integrate strategies and create new opportunities for individuals, enterprises and Singapore.

Workers must be prepared to build their own capabilities and take the training opportunities to upskill themselves or switch careers. It is key that our workers stay relevant in their employment.

Unions must work closely with the economic agencies or the sectoral tripartite committees so that information is disseminated to the ground. Workers must know that we are bringing in new technology that will require new skillsets. The job may be the same, the worker may be the same, but the skills needed to do the work will be different.

Workers need to adapt to this change, and unions play a critical role in getting ground support and making sure these workers are kept well-informed of the challenges. No one should be left behind.