We follow Thomas Lee – the deputy director of the community liaison team on Pulau Ubin – to find out how the National Parks Board is working to better the lives of the islanders there.

Have you ever thought of doing a job that does more than help pay the bills?

Perhaps a job that takes you away from the hustle of city life. A job that does not involve sitting behind a desk all day, or even one that sets out to better the lives of others.

Well, I recently met someone who checks all three boxes. 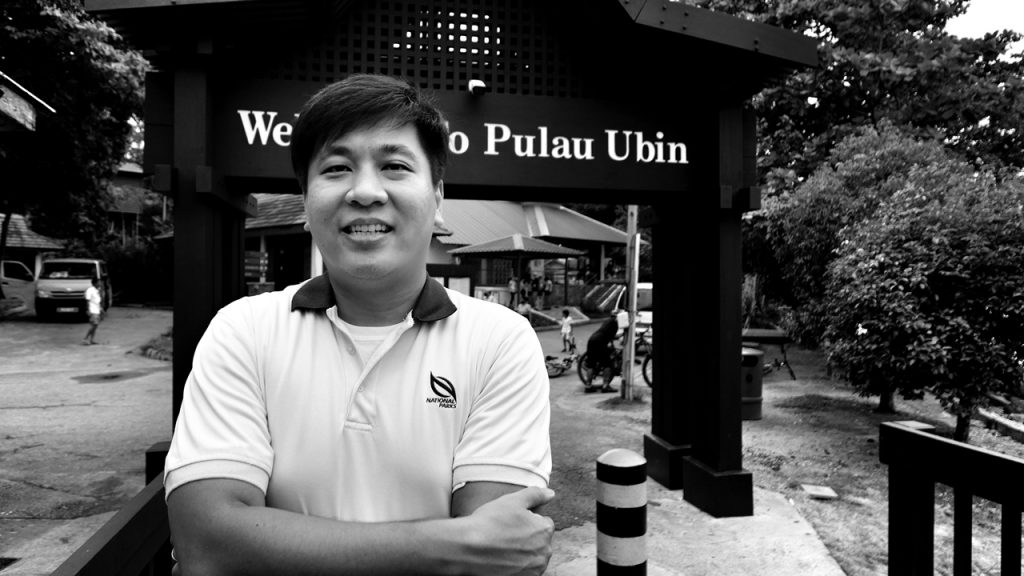 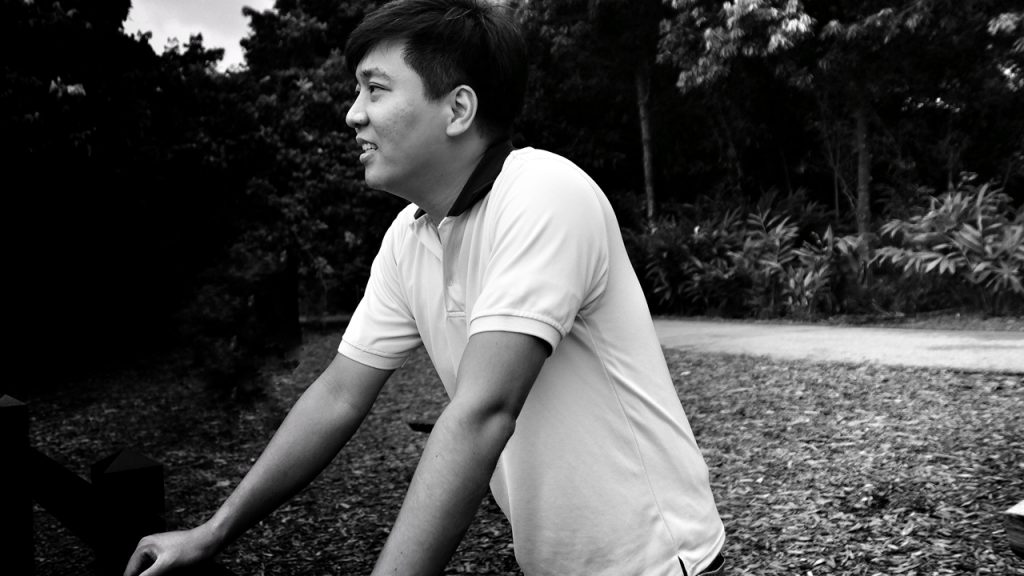 Think of him as Pulau Ubin’s answer to Moana – the Polynesian heroine in the Disney animated film of the same name, minus the singing and mentally challenged pet chicken.

He reaches out to the community, analysing their problems and helping to provide solutions to solve them. 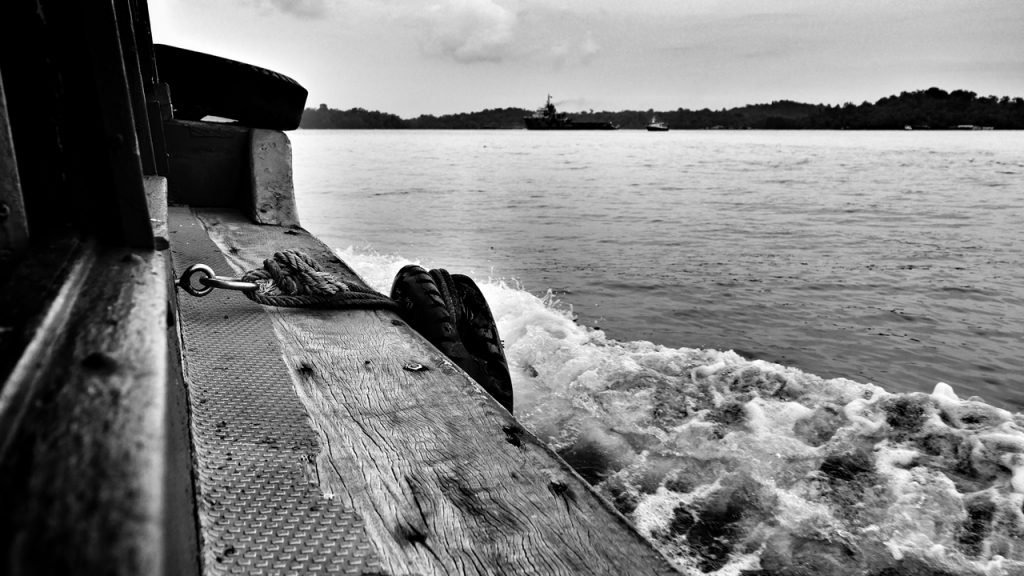 Every Monday to Friday, he makes his way down to Pulau Ubin pretty much like how every other visitor does – hiring a bumboat from Changi Point Ferry Terminal. 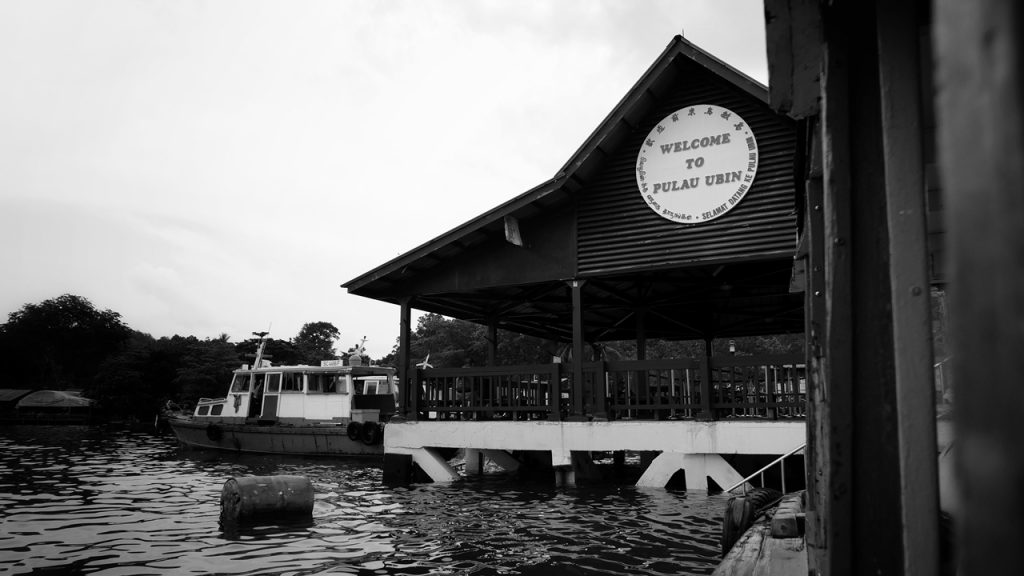 Set up in August 2019, the community liaison team supports and tends to the needs of the villagers on the island. 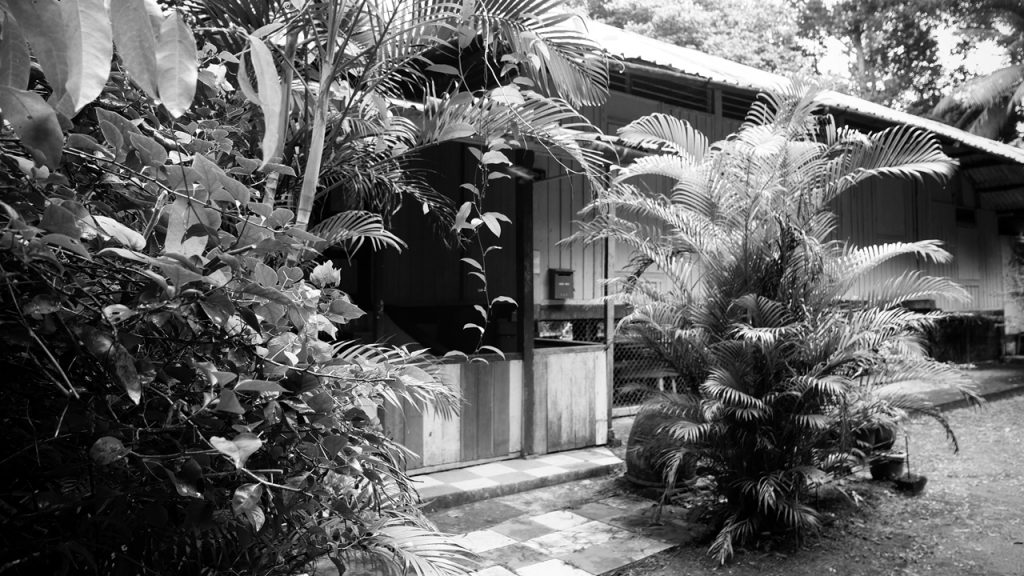 Occasionally, he facilitates requests from the villagers and their families to repair some of the kampung houses, some of which can be over 100 years old. 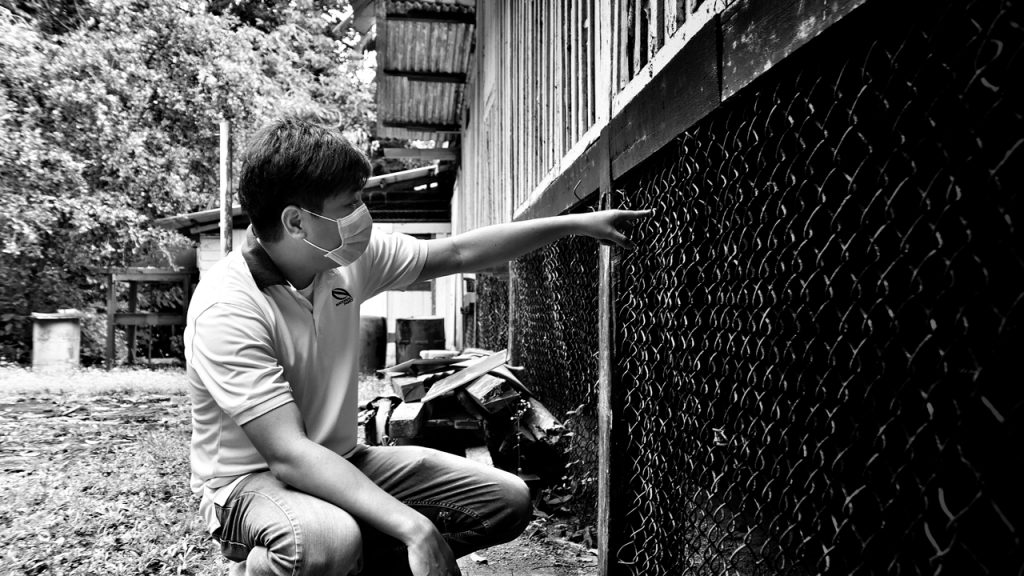 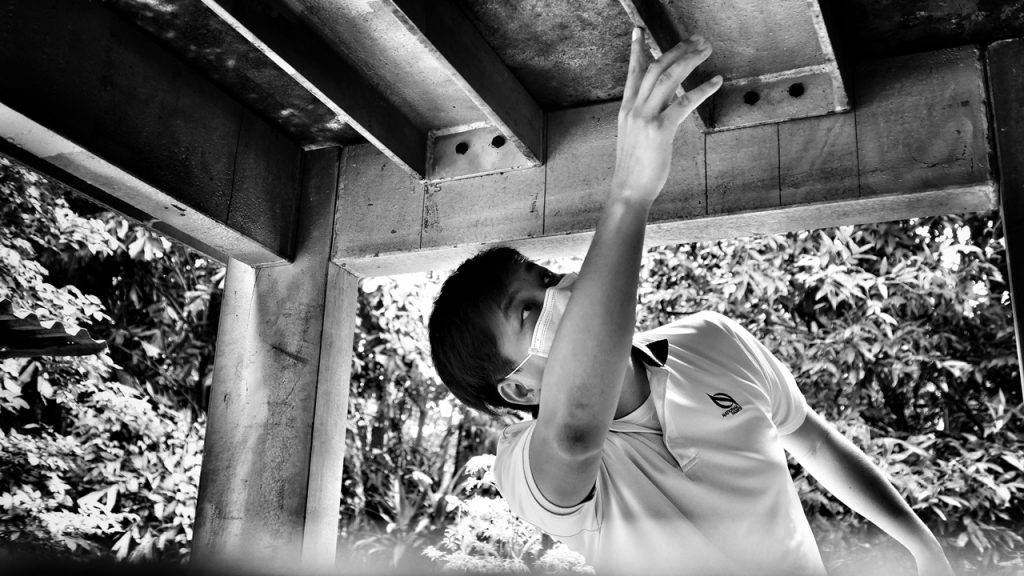 … as well as the structure that supports the water tank behind the house. 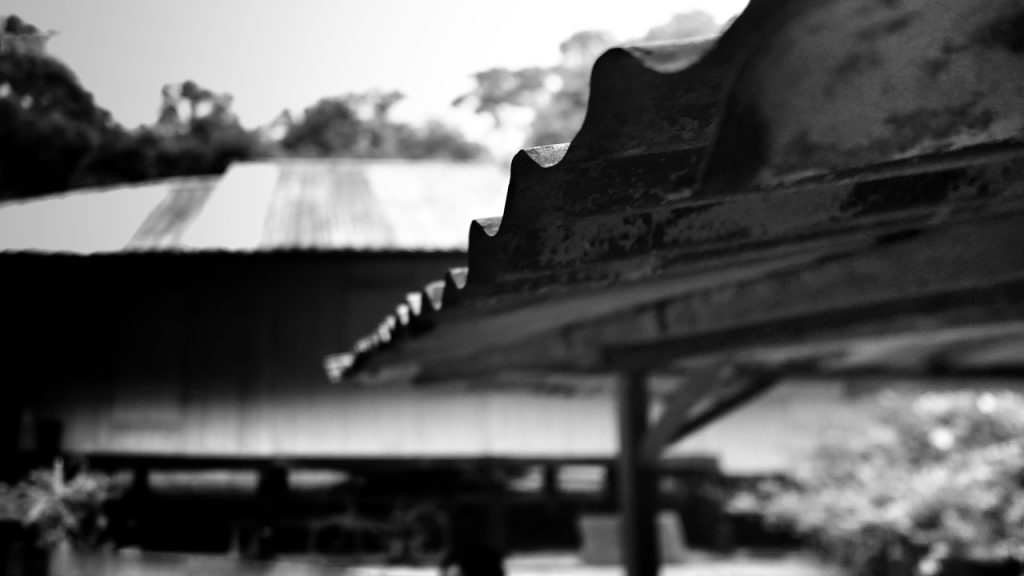 And NParks did not do the repair works on a whim either. 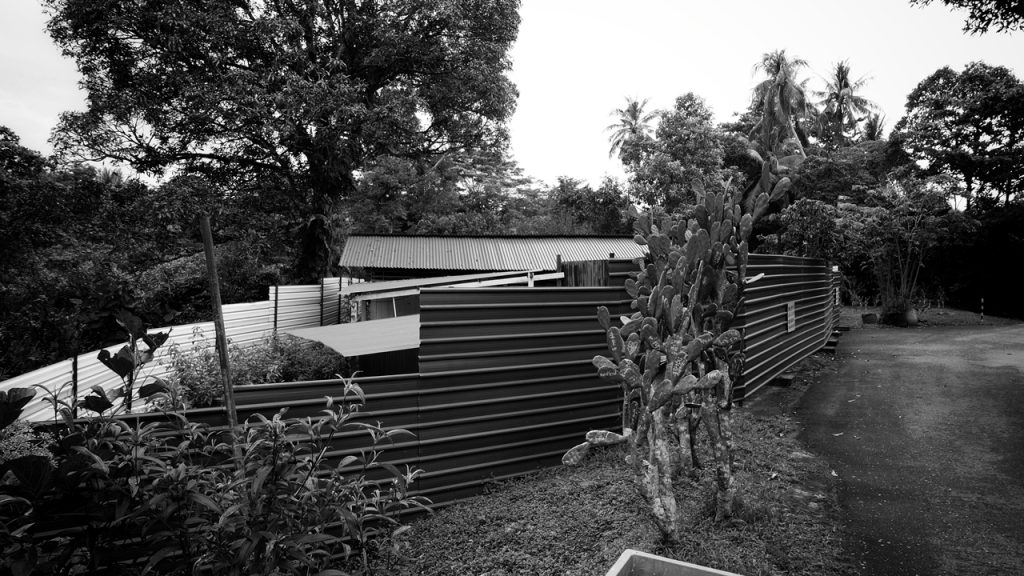 At the time of my visit, he was also helping to facilitate some refurbishment works to the house with the iconic yellow and green “Y u so like that” billboard. 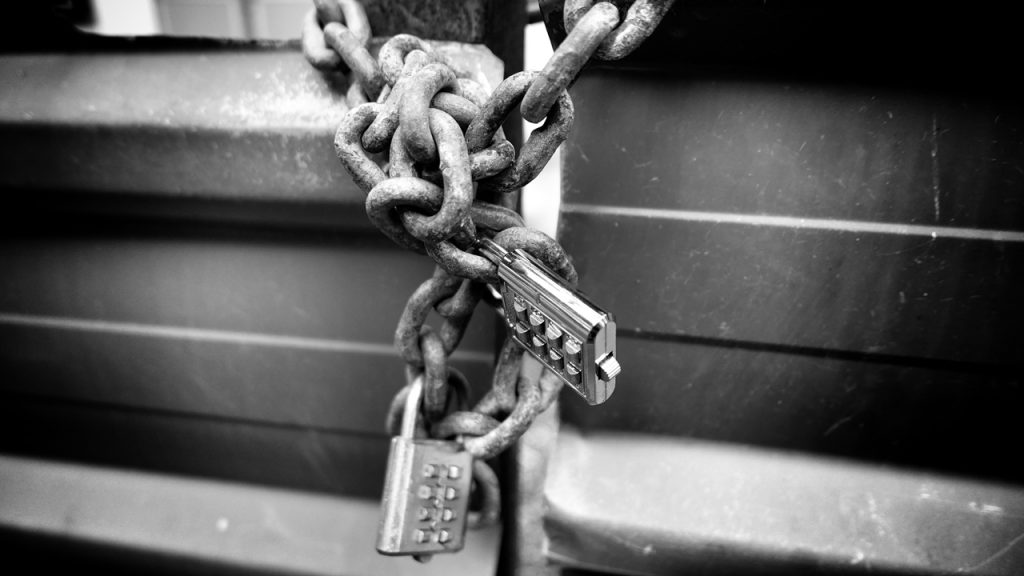 Alas, the locked hoarding prevented me from getting a full view of the only man-made structure I could remember from my last cycling visit around the island some 23 years ago. 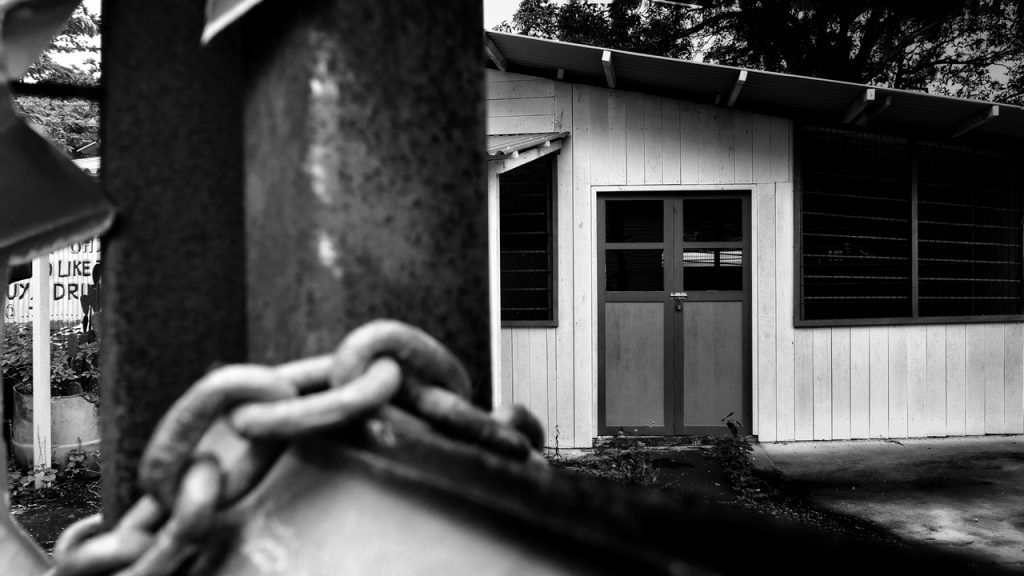 I guess a small peek is better than nothing. 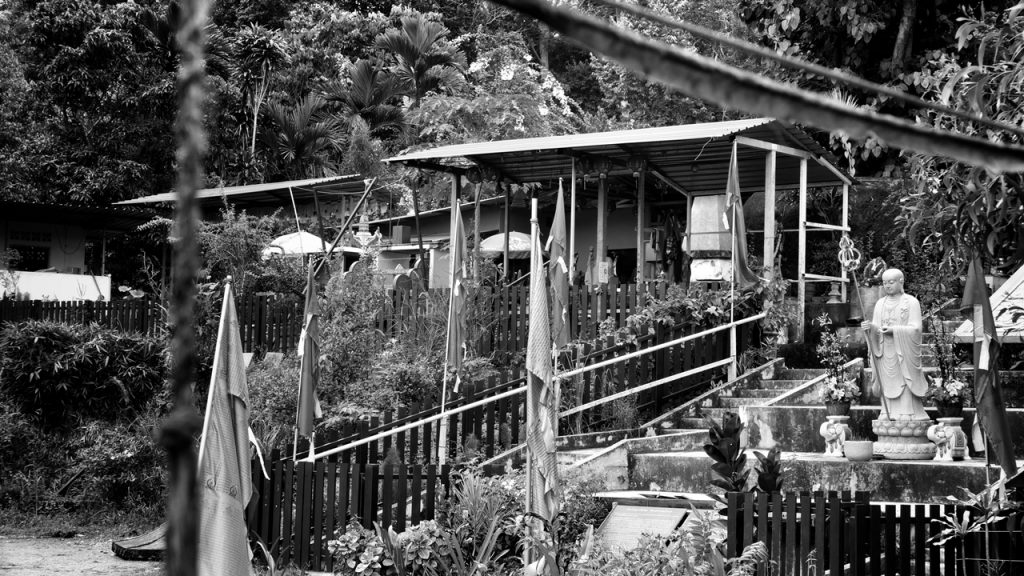 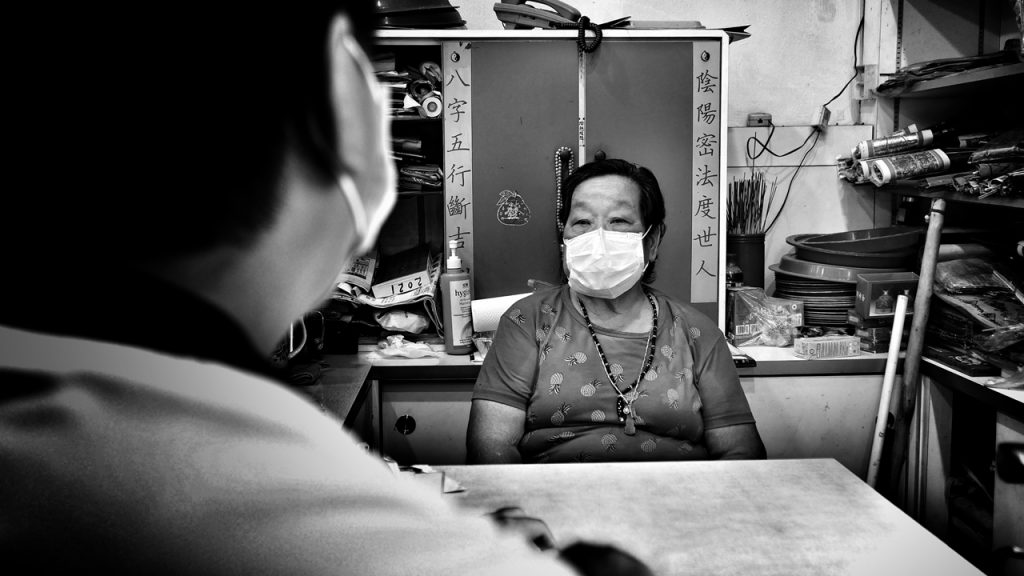 Residents like 77-year-old Mdm Ong Siew Fong and her 53-year-old daughter, who are the caretakers of the Wei Tuo Fa Gong Temple located some 2km from the main jetty. 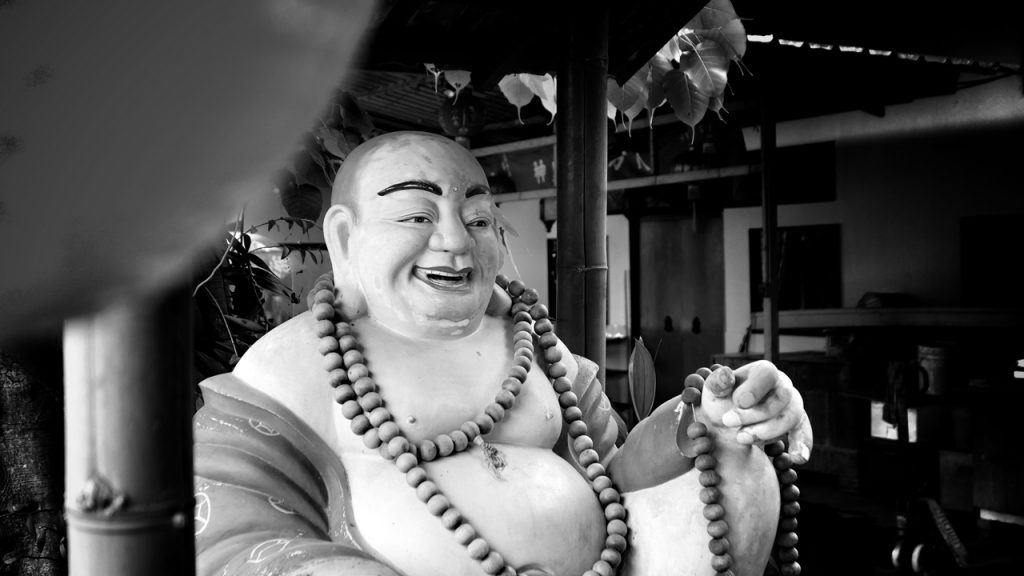 The rustic temple is home to shrines and statues dedicated to various deities and Chinese Buddhas. 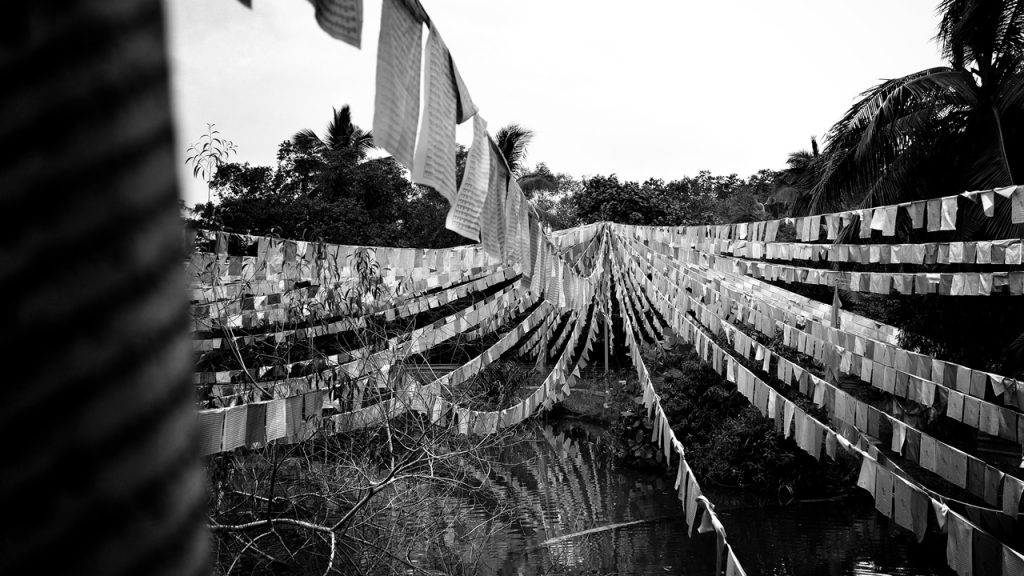 The temple ground is also a place of worship for Tibetan Buddhist devotees, evident from the stretches of Tibetan prayer flags looming over a nearby pond. 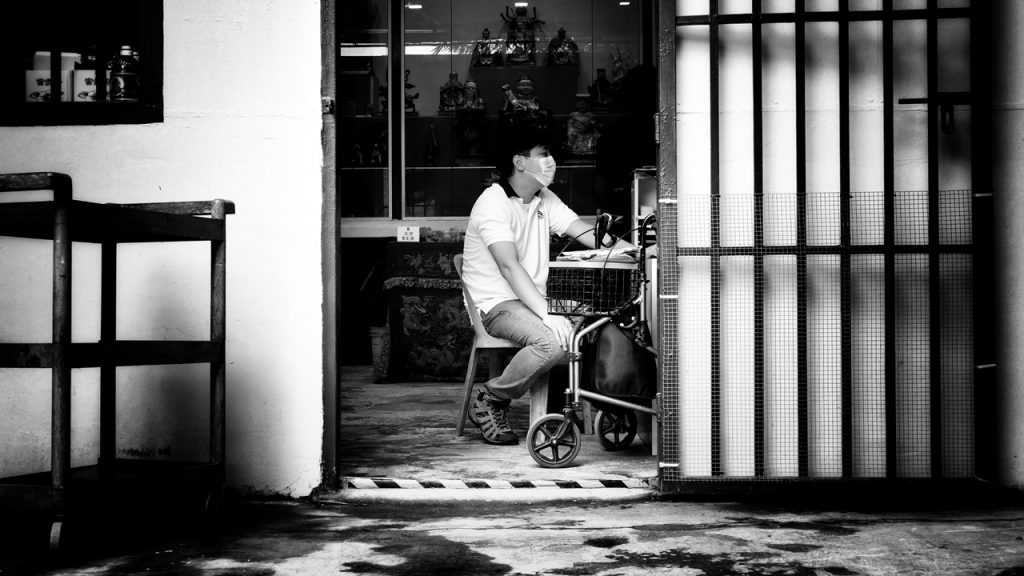 He politely introduced me to Mdm Ong, before settling down in front of the counter she was at to ask her about her day.

Earlier in January, Thomas and his team had partnered with the Singapore Red Cross to conduct basic health checks, counselling and assessment for 22 villagers, including Mdm Ong and her daughter.

He asks if there was anything that he could help her with, to which I vaguely heard her say something about monkeys in Mandarin. 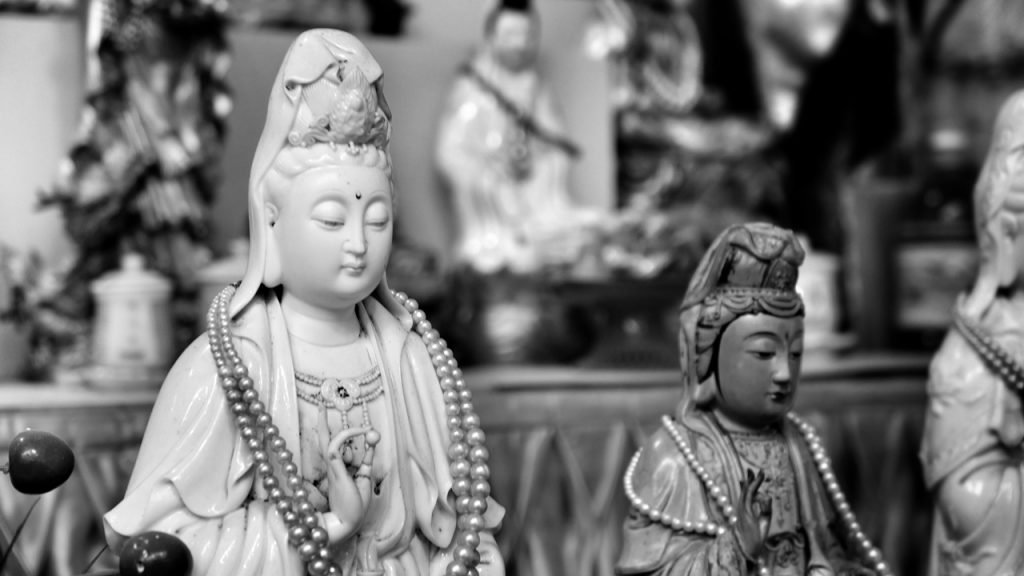 There had been issues of monkeys coming into the temple to steal food and offerings. 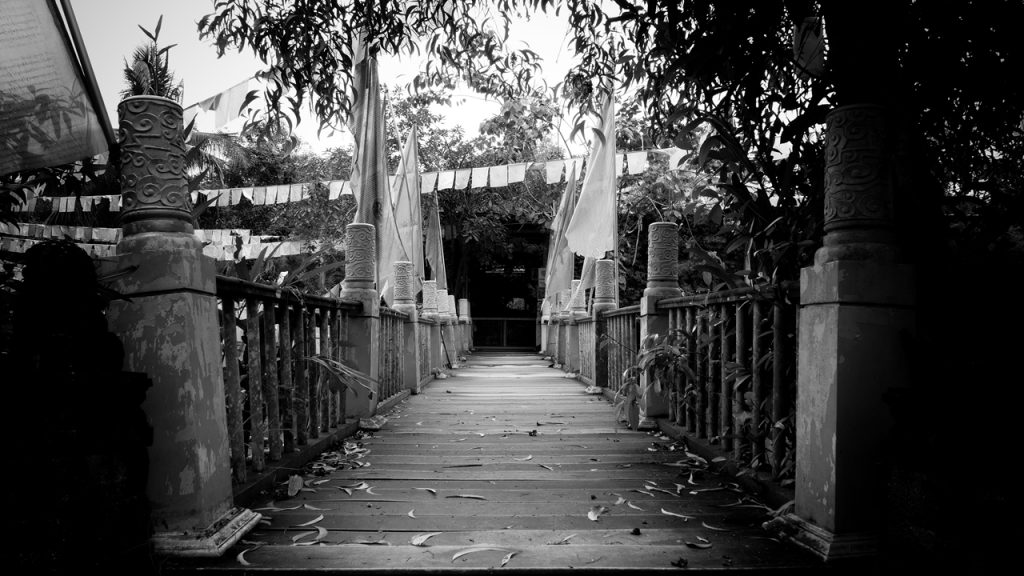 However, I did not get to see any during that day’s visit. 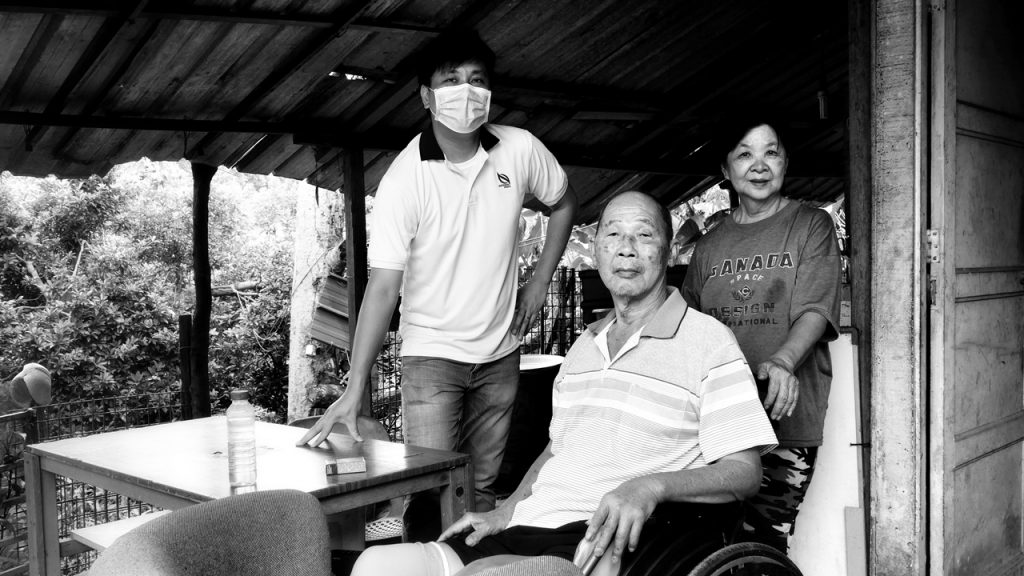 For our last residential visit for the day, Thomas introduced me to a 78-year-old villager and his wife.

Known to the other island residents as Botak, the elderly gentleman had to have his right leg amputated earlier this year due to some medical complications.

To assist with his transport back to the island, Thomas and his team worked with the Friends of Ubin (FUN) members from Accessible Ubin to help transport him from Changi Point Ferry Terminal to his home. 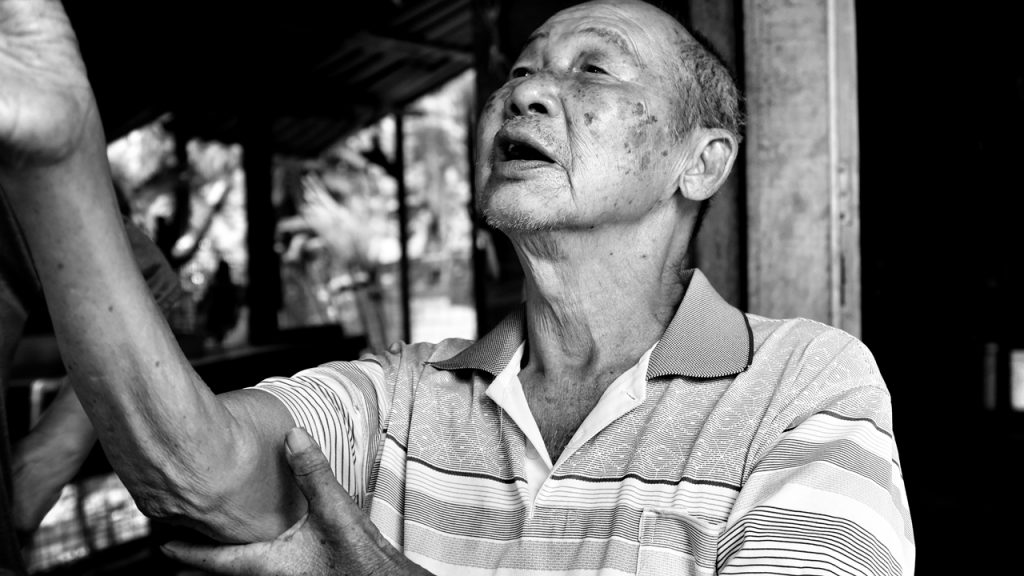 While the resident had gripes about the medical treatment on the mainland, Thomas managed to quell his frustration, occasionally putting a smile back on his face. 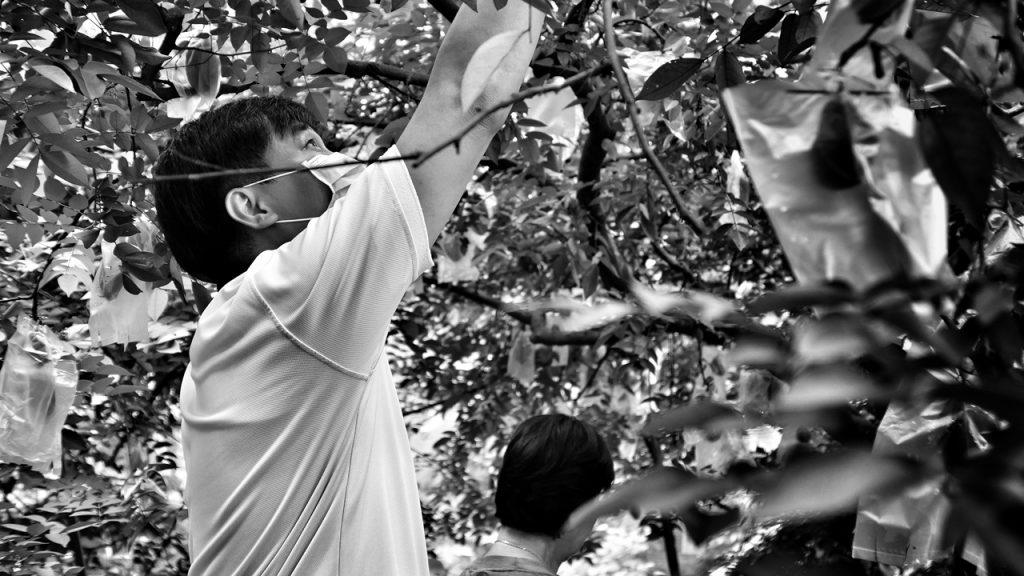 I realised why he was seconded over from the People’s Association to fill this role after seeing him interact with the senior islanders. 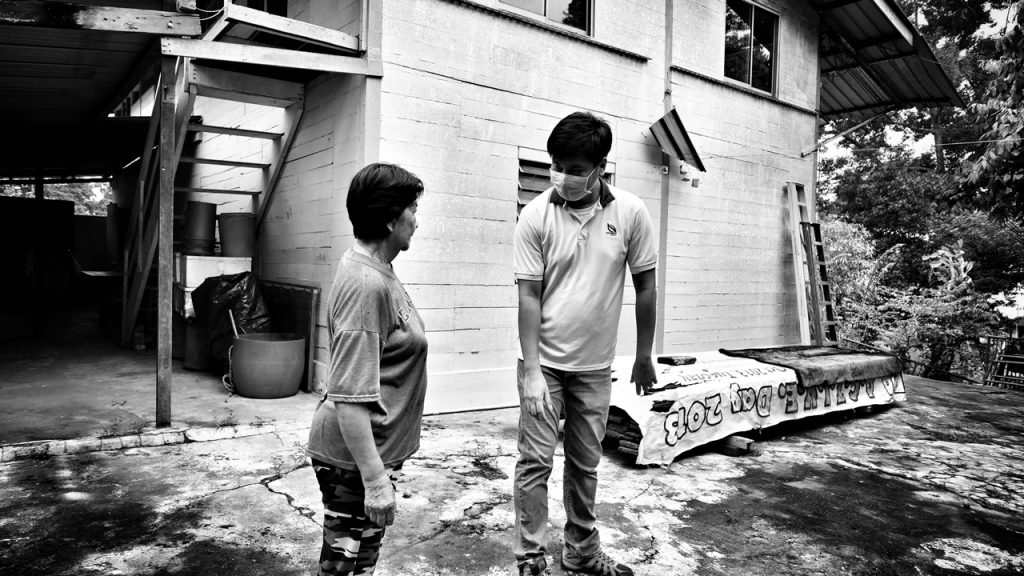 Always around with a listening ear, you could feel the empathy and compassion Thomas has for the seniors.

When asked what his main goal for the ageing population on the island is, Thomas said: “We hope to encourage them [the senior island residents] to be more active in their golden years, and we hope to enhance their wellness as well.” 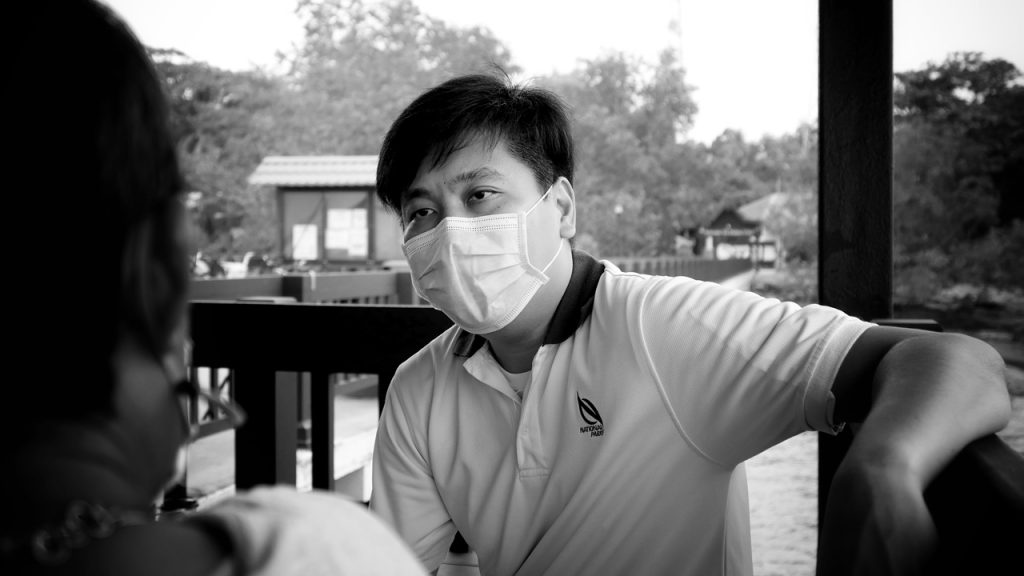 And it was not just the seniors. The community who works on the island all seem to recognise Thomas wherever we went. 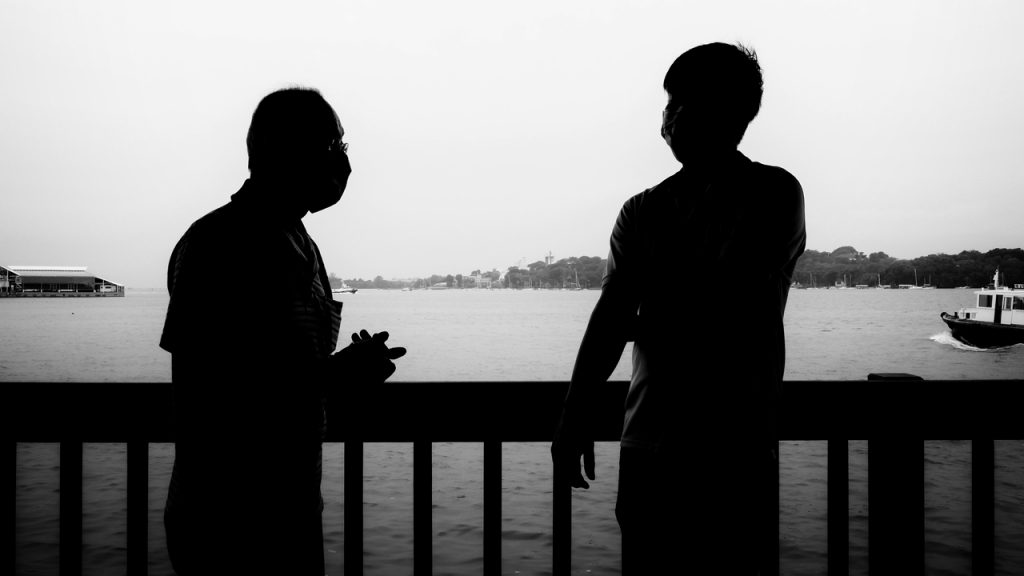 Even as we were about to leave the island, another member of the community approached Thomas for a quick consult.

The relationship Thomas has built with the islanders is admirable, to say the least, considering that he had only been working on the island for just over a year.

When I asked what else he hoped to achieve for the islanders, he said: “I also hope to introduce more initiatives to help the ageing population here.

“I think that the role is meaningful. I feel like I add value here.”

Tags: A Day In The Life OfPublic ServiceUnconventional Jobs
ShareShareSend

At Your Service, Even on Holidays

While most of us switch off from work during public holidays, some are always on – on duty, on standby,...

9 Things Workers Should Know About Budget 2021

Patrick Tay: Can PMEs Overcome Disruption and Discrimination in the Next Normal?

Heng Chee How: Keeping Faith with Our Older Workers

A Glimpse into the Life of a Landscape Maintenance Worker

Getting a Kick out of Life

The story behind Singapore’s first taekwondo fighter at an international multi-sport event is more than your average zero to hero...

Building Skills to Build Better Products, and a Better Future

Lessons from a Private Hire Driver

Grab driver Justin Lim shares his experience during the pandemic, on getting assistance and emerging stronger.