Can you believe that Singapore’s only Suzie Wong performer and leading pole dancer was once a customer service officer in a bank? We take you on a glittery journey of how she traded her office suit for cheongsams and costumes.

The fitness studio at Waterloo Street looks like any other, with laminated parquet flooring, a full-length mirror, soft ambient lighting, and people doing stretches in the latest exercise garb.

Except that there are six gleaming poles spread all across the studio affixed from floor to ceiling, hinting at a more unique fitness form.

She waits for the music to start. Then in one swift movement, she grabs a pole with both hands and effortlessly whips her body around it.

Round and round she goes, her strong arms swinging her body in elegant circular motions, legs held at a 45-degree angle to upkeep the momentum. Then she curls her legs around the pole and climbs higher and higher up the pole.

Slowly, she hoists her body up above her head, her legs grip scissors-like around the pole as she continues spinning upside down to the sensuous beat of the music.

Such gravity-defying feats of acrobatics are all in a day’s work for Ming Leong, one of Singapore’s leading entertainers and pole dancing instructors.

After graduating with a degree in arts and social sciences in 1990, Ming landed a customer service job in a bank. Interestingly, the hiring manager was more keen on her artistic background than her actual work experience.

As a fresh grad with no working background, Ming had included her singing stints with her mother, a Cantonese opera performer, into her resume. Needless to say, it caught her future boss’ eye and the rest, as they say, is history.

“He discovered me, and I discovered myself,” she recalled with her signature throaty laugh.

Ming quickly became involved in organising the bank’s events, often dealing with event management companies, and performing in the events as a singer.

On many occasions, she entertained higher management including the Chairman, and soon found herself in the highly-coveted inner circle. She was doing well at her job, too, having chalked up a few promotions.

However, after four years at the bank, Ming decided that a corporate job was not her cup of tea. Ironically, her bank job had made her realise that her real calling was being an entertainer, and she took a leap of faith to move into the exciting yet cutthroat world of entertainment.

Breaking into the Events Industry

In the halcyon days of the 90s, the entertainment industry was booming. Mobile discos were all the rage, and entertainers — be it DJs, musicians, magicians — were practically gods, worshipped by their fans and put on pedestals by their audience. Those were the days of legends like ventriloquist Victor Khoo, rocker Douglas Olivero, and Singapore’s foremost rock band Tania.

But that hardly bothered Ming who began knocking on the doors of event management companies to secure gigs. It helped that she knew many of them from her bank days and they were willing to give her a shot. To supplement her income, she also started giving singing lessons.

What really gave her the break she needed was winning high profile singing contests such as the Talentime-style tribute band competition on Rollin’ Good Times (variety television show on Singapore music) in 1993.

She also entered music contests by Pioneer, a popular electronics brand of the 90s, where although she didn’t win, gave her rave reviews and recognition.

Life is a Cabaret

For her winning performance in Rollin’ Good Times’, Ming had to pick a song from the silver screen, and went with Liza Minnelli’s popular hit Life Is A Cabaret from the 1972 movie Cabaret.

To give herself an edge, Ming hired a group of professional dancers to jazz up the performance, and they performed as a group known as Ming & Movement.

“That gave me a portfolio and I grew such a bond with my dancers. We came up with the name of Ming & Movement, so when people hired me, it would be with my dancers,” she explained.

Sometime in 1995, an event company asked if she could do something related to Suzie Wong, a fictional bargirl character famous for wearing cheongsams and cha-cha dancing. It was also around the same time that she was asked to audition as the Suzie Wong singer at a local club named after the character.

This became the turning point of her career, as it launched her into becoming the “Suzie Wong of Singapore” in 1996, a three-in-one entertainment powerhouse who sings, dances and acts.

“When I saw pictures of the person playing her (actress Nancy Kwan from the 1960 movie The World of Suzie Wong), I could resonate because I kind of look like her. I dressed up in cheongsam, did the first show and the character just stuck with me till now.”

“I really grew the character. Back then, Suzie Wong was younger and more ‘Ah Lian’, but now she has grown to become sultry cool, with a dose of comedy.

“At that time, I would say that Suzie Wong may not work for all crowds, maybe six out of 10, but now I would say it works nine out of 10 times because I have already absorbed that character into me, so I don’t need to try too hard to be entertaining,” she said of her career-making journey as her alter ego. 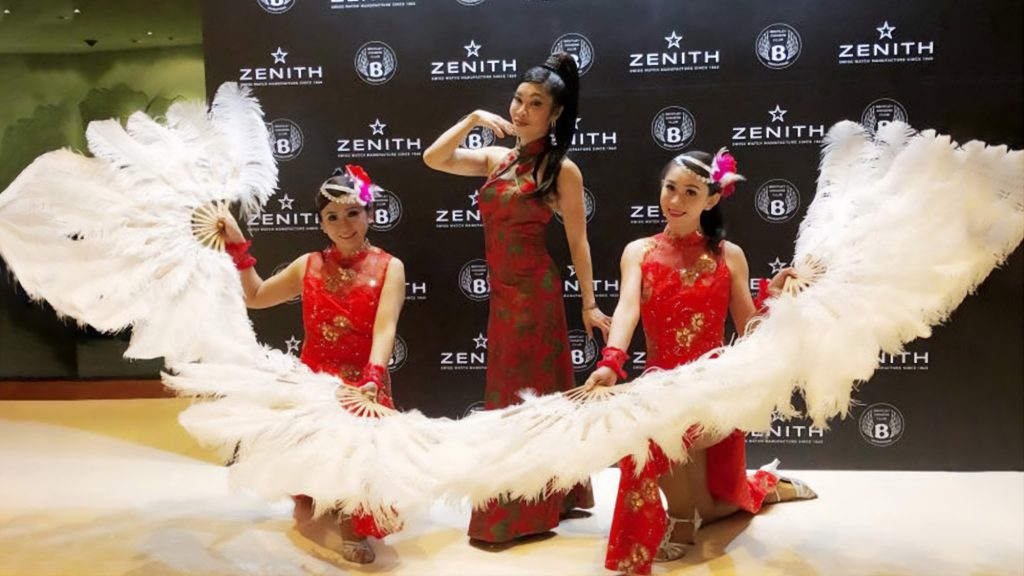 After 10 years performing as Suzie Wong, Ming decided it was time to infuse something different into her act. After all, many people had already seen her performance over the years.

“I wanted to reinvent the performance to sell something new to the events industry,” she explained.

Initially, Ming incorporated belly dancing, but quickly realised that it was easily copied, with many entertainers stealing her style. She eventually gyrated towards pole dancing because it had several barriers to entry.

“I took pole dancing not knowing if it was for exercise or another purpose, I just wanted to try it. The moment I tried it, I knew it was going to be difficult. If I were to learn it well enough to do shows, I don’t think people will be able to copy it that quickly.

“There were no ready-made poles at events, so I actually worked with carpenters to fabricate a pole which wasn’t cheap. It was also super heavy, it needed four burly guys to set up at an event! So there was a fee needed to set up each time, and there were also a lot of safety aspects to consider,” she elaborated.

Due to the negative connotations surrounding pole dancing, Ming met with a lot of resistance from various groups and communities at first.

Naturally, the sexy outfits did not help, but as Ming explained, bare skin is the contact point between the person and the pole for ease of movement. So, the more skin is exposed, the easier it is for the dancer to execute more dance moves.

She is also quick to point out that pole dancing is a form of exercise because you can book a class on it in the same way as something like yoga or pilates.

In 2008, the veteran entertainer set up her own studio called Acro Polates to teach pole dancing. She has also added aerial dancing to her performance repertoire, and now runs two studios to groom a whole generation of local aerialists.

“My forte is to marry exercise and entertainment together. When I teach a course, it becomes a performance,” she said. 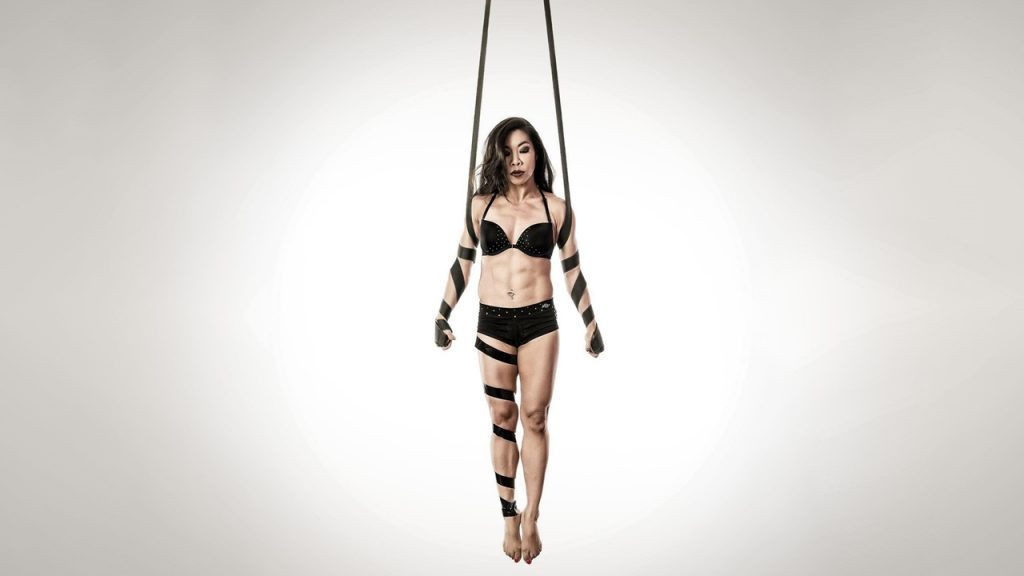 The Dark Side of Glitz

All that glitters is not always gold, and Ming revealed the downsides that come with the job. For starters, thanks, or no thanks to her entertainer status, people often discredit her intelligence.

“People think this job is a no-brainer, you’re just singing, you’re just entertaining. But this is career, it takes a bit of effort. Typically when I’m asked to meet the clients, you can see them crossing their arms when I walk in, like, ‘show me what you’ve got’ or ‘you better prove yourself’. Once I opened my mouth to speak and show them that I’m actually not a brainless bimbo, then I slowly earn their respect.”

“They will never imagine a graduate doing something like that. It takes a lot of hard work and intelligence to put on a good show,” Ming explained.

People’s general impression of her got worse when she took on pole dancing.

“I became not only an entertainer but a pole dancer, it was a double whammy. I had foreign men write to me with very lewd suggestions,” shared Ming, who has also performed overseas in countries like Dubai and the United States.

As someone who has to go to great lengths to keep the crowd happy, dangerous situations are de rigueur. Once, Ming was performing at an incentive event where Indian multi-hyphenate Amitabh Bachchan was the star. Things started out well, but took on a terrifying twist.

“The guests were dancing with me and suddenly someone lifted me up with my short skirt all riding up. I had safety shorts on but still, it was unsightly and I didn’t know what was happening. Then he just let go, and I dropped. I was wearing heels, and in the moment, I felt that ‘electric current’ passing through me. I just stood there singing my song for 30 seconds, trying to recover from the shock,” she recounted.

And like most forms of exercise, the tendency to sustain sports injuries are to be expected.

“I fell off a pole once and had to pretend nothing had happened. It was painful and shocking, but the show must go on. It was three weeks after my knee surgery and I had to incorporate a diamante walking stick into my act because I was limping so badly, but still had to appear glamorous,” recalled Ming.

Entertaining in the Age of COVID-19

It is no secret that the events industry is one of the biggest victims of the health pandemic. Overnight, physical events such as corporate dinners and team building activities to mass sporting events and national scale celebrations were cancelled.

Entertainers like Ming suddenly found themselves without physical gigs to earn a living.

But like always, she has been able to survive, this time by conducting more pole dancing classes both online and offline and encouraging her instructors to keep on training because she believes the industry will bounce back “pretty strongly”.

She has also ventured into virtual events where she does pre-recorded performances in a studio, as well as stepped up to produce masks for entertainers which are currently being sold on e-commerce platforms like Lazada.

“All my life, I’ve always been pivoting, so it wasn’t too hard to think out of the box, but of course, it is a bit scary,” she said frankly.

At 52, after 25 years of being in the line, Ming still has the youthful exuberance and enthusiasm as when she first started, with no plans of slowing down despite the uncertainty of the events industry.

“When the crowd is enjoying and smiling, then you know your value. One of the greatest satisfactions in my life is, for the 20, 30 minutes that I am performing, I have injected happiness into people. My role is to really create that impact and presence. If I even remotely achieve it, I think I have chosen the right career,” she surmised.