by Christine Leow
in Opinions

You are pregnant, and your supervisor, who used to praise your work, is suddenly picking on you and implying that you have become less productive.

You have been in the same company for years, waiting for that promotion. But the position goes to a foreign hire instead.

In his National Day Rally speech (August 29), Prime Minister Lee Hsien Loong agreed that unfair treatment on the job can be a “personal and emotional” experience.

Perhaps that is why reporting and regulating discrimination in the workplace has been a challenge.

Although in 2020, the Tripartite Alliance for Fair and Progressive Employment Practices (TAFEP) investigated 60 per cent more possible discriminatory hiring practices in the first half of the year compared to the same period in 2019, some believe under-reporting of workplace discrimination remains.

So, what is workplace discrimination, and where can you go for help?

What is Workplace Discrimination?

But from the examples of other countries, discrimination in the workplace happens when decisions are made, and actions are taken unfairly by employers based on an applicant’s or employee’s

It can happen at any stage, from hiring to transfers, promotion, assignment of tasks, dismissal and retrenchment.

What might lend to the difficulty of pinning discrimination down is that it is a relative concept. It is dependent on the treatment received compared to someone else in the same situation.

Discrimination can take different forms. Direct discrimination happens when someone is treated worse than others because of a protected attribute. An employer willing only to hire Chinese people would be an example of that.

However, according to Assistant Professor of Law at the Singapore Management University, Benjamin Joshua Ong, discrimination is not always deliberate.

“An ostensibly neutral practice by an employer can have different effects on different workers. That can amount to indirect discrimination, even if the employer has no intention to discriminate,” he said.

Added Assistant Professor Ong: “There are also other issues such as workplace harassment and bullying on grounds such as gender, race or religion.

“These are not the same as discrimination, but they can stem from the very same attitudes that often give rise to discrimination.

“For example, a failure to consider workers on their own merits, instead of reducing them to crude stereotypes.” 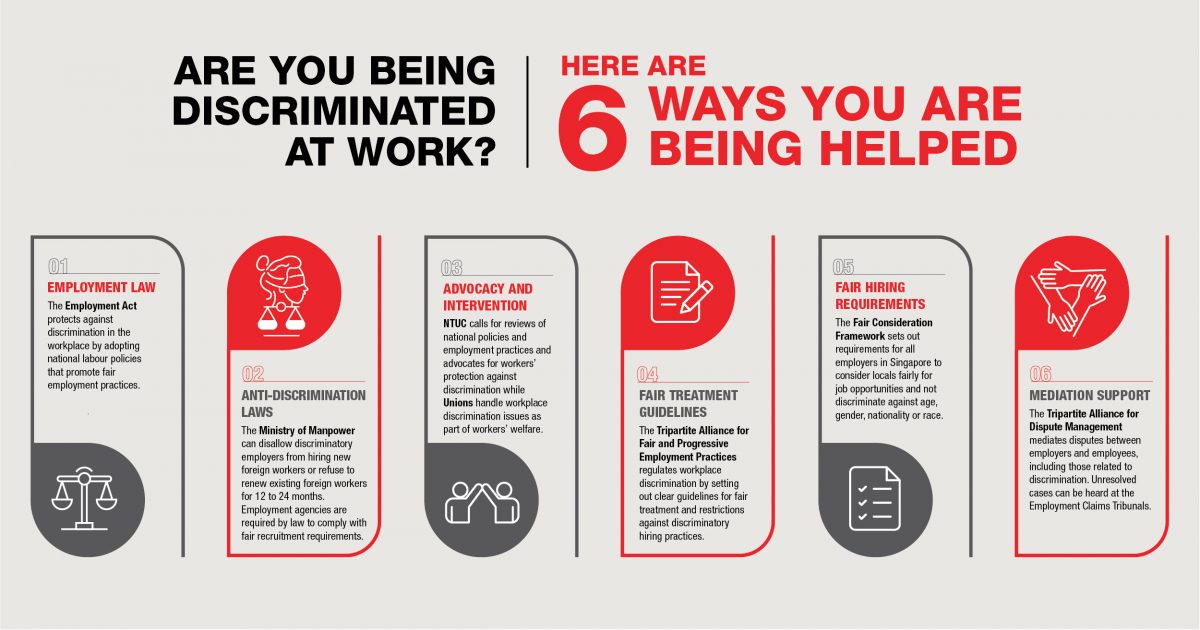 Thus far, Singapore has taken a non-legislative approach towards workplace discrimination. As a result, there is, as yet, no framework of dedicated anti-discrimination legislation.

Instead, education and enforcement are the primary means by which the government handles discrimination at work.

Here are some provisions for the protection of workers against discrimination.

This is Singapore’s primary labour law and provides all employees’ basic terms and working conditions, with some exceptions.

The law covers several areas related to employment, including contracts of employment, working hours and holidays, time off when sick and sick pay, health and safety, and data protection. Anti-discrimination – gender, race, religion, age, sexual orientation and disability – is but one of the areas it covers.

The Employment Act protects against discrimination in the workplace by adopting national labour policies that promote fair employment practices.

MOM can disallow discriminatory employers from hiring new foreign workers or refuse to renew existing foreign workers for a minimum of 12 months and a maximum of 24 months.

Employers and key personnel can also face up to two years imprisonment and a fine of up to S$20,000 or both if they make false declarations on fair consideration.

Employment Pass applications can be denied and a ban placed on hiring or renewing foreign workers if employers are found to have pre-selected a foreign candidate and not given fair consideration to local applicants.

In October 2020, MOM introduced new licence conditions for employment agencies (EA) that require them to comply with fair recruitment requirements in TGFEP when recruiting for employers.

Traditionally, the role of the unions has not only been to fight for workers’ wages but also to look out for their welfare. The protection of workers at workplaces against discrimination falls into this category.

Besides protecting workers at the workplaces through the unions, NTUC works with MOM and the Singapore National Employers Federation (SNEF) in a tripartite relationship to champion the interests of the Singapore worker.

It calls for reviews of national policies and employment practices and advocates for workers’ protection against discrimination in the workplace. For example, in August 2021, NTUC called for harsher penalties for companies that continue to discriminate against PMEs based on their age and nationality.

TAFEP regulates workplace discrimination by setting out clear guidelines for fair treatment and restrictions against discriminatory hiring practices. Although they are guidelines and not law, the Ministry of Manpower (MOM) can impose punitive measures against errant employers that restrict them from hiring foreign workers.

Beyond that, TAFEP, set up in 2006, also educates the public and employers by correcting stereotypes and changing mindsets. For example, the Tripartite Guidelines on Fair Employment Practices (TGFEP) was launched to guide employers in adopting fair hiring practices.

Introduced in 2014, FCF sets out requirements for all employers in Singapore to consider locals fairly for job opportunities and not discriminate against age, gender, nationality or race.

It also aims to address discrimination against locals by identifying employers with indications of discriminatory hiring practices. Employers on the FCF Watchlist will have all of their Employment Pass applications scrutinised or withheld.

Counsel rather than confrontation has been the preferred mode of dealing with errant employers regarding discrimination.

If there is a dispute in the workplace, the first course of action is mediation through the Tripartite Alliance for Dispute Management (TADM). If it is not resolved, the worker can file a claim with the Employment Claims Tribunals (ECT). In this way, The decision can resolve disputes amicably and informally.

At the recent National Day Rally speech, PM Lee announced that the government would “enshrine the TAFEP guidelines in law” to “give them more teeth and expand the range of actions we can take”. This was after consultation over the years with the Labour Movement and NTUC MPs.

Assistant Professor Ong noted that such laws should also protect workers from being victimised because they have complained of discrimination.

“If discrimination is frowned upon, then we must be willing to listen with an open mind to those who complain about discrimination without summarily dismissing them as trouble-makers,” he said.

Nonetheless, litigation should be the last recourse.

Said PM Lee: “Philosophically, writing TAFEP guidelines into the law is a significant move. It signals that we do not tolerate discrimination at workplaces.

“But in practice, we hope to operate similarly as today, except better. We should still resolve workplace disputes informally and amicably, if at all possible.”

Conciliation and mediation remain the preferred course of action against discrimination in the workplace.